A number of filmmakers have remade their own films with little success (such as George Sluizer with The Vanishing and Takashi Shimizu with The Grudge); the most obvious and notable exception to this rule is Alfred Hitchcock. While the 1934 The Man Who Knew Too Much is an expectedly effective and fast-paced thriller, Hitch outdid himself with the ’56 retelling. Featuring a fantastic lead performance by Jimmy Stewart and some jaw-dropping moments of directorial virtuosity, the film remains one of the legendary’s filmmaker’s most memorable efforts.

Stewart stars as Ben McKenna, a doctor who finds himself embroiled in an assassination plot while traveling through Africa with his family. Costarring Doris Day as Ben’s wife and featuring a typically extravagant Bernard Herrmann score, The Man Who Knew Too Much remains a prototypical example of a truly great adventure/espionage movie, and has since gone on to influence such contemporary examples of the genre as The Bourne Identity, Mission: Impossible and Enemy of the State.

Best quote: “Don’t you realize that Americans dislike having their children stolen?”
-The Ambassador

There’s never been any doubt that the original Ocean’s Eleven (1960) was just an excuse for Frank Sinatra, Dean Martin, Sammy Davis Jr., and the rest of the Rat Pack to hang out in Vegas for a few months. As a result, it features some sensational visuals, engaging performances, and even a few songs — but little else. As a heist flick, Frank and the gang failed to deliver. Enter Steven Soderbergh. Along with screenwriter Ted Griffin and a cast comprised of a veritable who’s who of young Hollywood, Soderbergh captures the fun and spontaneity of the original without sacrificing the heist itself.

George Clooney picks up where Sinatra left off; he plays Danny Ocean, a felon who assembles a motley crew of misfits in order to rob three Vegas casinos — simultaneously. Costarring Matt Damon, Brad Pitt and Julia Roberts, Ocean’s Eleven deftly blends the good-time vibe of its predecessor with an unpredictable, thoroughly engaging storyline that seamlessly combines thrills with laughs.

Best quote: Danny: “The house always wins. Play long enough, you never change the stakes. The house takes you. Unless, when that perfect hand comes along, you bet big, then you take the house.”
Rusty: “Been practicing this speech, haven’t you?”
Danny: “Little bit. Did I rush it? Felt I rushed it.”

A zombie flick that was better the second time around, a cult classic you probably didn’t realize was a remake and more…

Zack Snyder’s update of George A. Romero’s classic zombie flick (originally released in 1978) is less of a remake and more of a companion piece, as the two films share little in common other than the basic premise. While Romero’s version had its share of horrific elements, the legendary filmmaker was more interested in lampooning ’70s consumerism than flat-out scaring the viewer. Right from the opening frames of Snyder’s take on the material, it’s abundantly clear that the satirical elements of Romero’s screenplay have been jettisoned in favor of a more intense, balls-to-the-wall experience.

Starring Sarah Polley, Ving Rhames and a host of familiar faces, Dawn of the Dead kicks off with a gripping and thoroughly entertaining sequence in which Ana (Polley) returns home after a grueling day at work only to discover that her neighbor’s daughter has been turned into a zombie. Along with a few other survivors, Ana must hide out in a nearby mall — though it’s not long before the undead attackers figure out how to gain access to their refuge. While nobody will ever mistake this Dawn of the Dead for its predecessor, the movie remains one of the more effective zombie flicks to emerge since the genre’s recent resurgence.

Best quote: “When there is no more room in hell, the dead will walk the earth.”
-Televangelist

If you didn’t realize that Scarface was a remake, you’re not alone. Because the film has become such a significant and unforgettable cinematic memento of the 1980s, it’s easy enough to forget that it’s based on a 1932 film of the same name. Of course, the two movies have very little in common aside from a vaguely similar storyline. In fact, Brian De Palma’s remake is packed with everything a film from the ’30s could never get away with: nudity, absurd amounts of violence, coarse language, and more.

But beyond De Palma’s inventive direction and Oliver Stone’s engaging, episodic screenplay, Al Pacino’s searing performance as Cuban drug kingpin Tony Montana remains the film’s most indelible aspect. It’s a performance that has understandably gone on to become one of the most famous of Pacino’s career, and along with costars such as Michelle Pfeiffer, Robert Loggia and Steven Bauer, the actor effectively paints a portrait of the American dream gone horribly wrong.

While the 1958 original does feature cooler-than-cool icon Steve McQueen in his first lead role, the cheesy special effects and campy dialogue have effectively prevented the film from becoming anything more than an antiquated curiosity. The 1988 remake, on the other hand, is everything a horror flick should be: scary, bloody and packed with subtle (and not-so-subtle) instances of dark humor.

Featuring a surprisingly clever screenplay cowritten by director Chuck Russell and Oscar-nominated filmmaker Frank Darabont, The Blob revolves around the titular creature — an amorphous mass with a taste for human flesh — as it terrorizes the residents of a small town. With its engaging performances and cutting-edge special effects, The Blob holds up surprisingly well — which is something that can’t be said of most horror films of the ’80s (have you tried watching the original Friday the 13th lately?)

A controversial selection that is sure to annoy some, an actor who made an iconic movie character even better and more great remakes…

This could easily be the most controversial selection on this list, as the 1962 version of Cape Fear remains one of the more memorable thrillers of that era. But with legendary filmmaker Martin Scorsese behind the camera and a tour-de-force performance from frequent Scorsese collaborator Robert De Niro, it’s impossible to deny the power of this 1991 remake.

The story revolves around Max Cady (De Niro), a vicious rapist who’s just been released from prison after a 14-year stint behind bars. Convinced that his lawyer (played by Nick Nolte) hid a document that could have kept him out of jail, Cady embarks on a campaign of intimidation and violence against his attorney’s family. Scorsese ratchets up the tension considerably, aiming for the jugular from the get-go. The fact that the film was the inspiration for one of the best episodes of The Simpsons further cements its status as a contemporary classic.

Best quote: “Come out, come out, wherever you are!”
-Max Cady 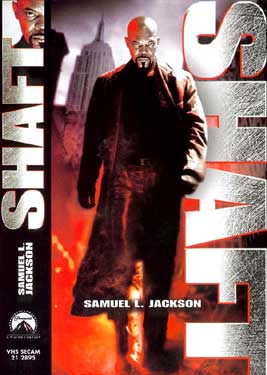 It was a no-brainer, really. Asking Samuel L. Jackson — one of the coolest actors of his or any other generation — to play an iconic figure like John Shaft is just one of those ideas that seems obvious. And as smooth and suave as Richard Roundtree’s original Shaft was, he can’t help but come off as a clumsy oaf when compared with Jackson’s super-slick take on the character. Director John Singleton effectively brings John Shaft into modern times without sacrificing some of the more outdated aspects of his personality, while Roundtree himself makes a cameo as Shaft’s uncle (even though the actor is only six years older than Jackson!)

The plot is almost irrelevant next to Jackson’s stellar performance, but Singleton — along with cowriters Richard Price and Shane Salerno — nevertheless offers up an intriguing storyline revolving around Shaft’s attempts to bring two nefarious criminals to justice. Said criminals are played by noted scene stealers Christian Bale and Jeffrey Wright, which is yet another reason why this version outranks the 1971 original in virtually every way.

The Fly marked cult director David Cronenberg’s first really big hit, and it’s not difficult to see why. Based on the 1958 film of the same name, The Fly follows quirky researcher Seth Brundle (Jeff Goldblum) as he develops a teleportation device that actually works. But while he’s testing it for the first time, the titular insect flies into the chamber, transforming him into an unprecedented hybrid of man and fly.

The concept is slightly different than that of the original, which featured the scientist’s head atop the fly’s body (and vice versa). And while that film had a memorably grim conclusion (the scientist, shouting “Help me!” in a tinny voice, is eaten by a spider), it certainly feels like a product of its time. Cronenberg’s version, however, remains relevant today — thanks primarily to some exceedingly brutal special effects and a typically entertaining performance by Goldblum, who easily overcomes his gregarious persona to become a genuinely sinister figure.

Given that The Magnificent Seven is considered by many to be one of the best “guy” flicks of all time, its place on this list goes without saying. And though Akira Kurosawa’s Seven Samurai — this film’s predecessor, originally released in 1954 — remains a classic of the samurai genre (and rightly so), The Magnificent Seven nevertheless tops it in terms of sheer machismo. With a cast that includes such icons as Steve McQueen, Charles Bronson and Yul Brynner, the film follows seven gunmen who agree to help defend a poor Mexican village from ruthless bandits.

Similarly to movies like The Great Escape and The Dirty Dozen (both of which also feature Bronson), The Magnificent Seven follows a disparate group of tough guys as they attempt to overcome seemingly insurmountable odds to accomplish an exceedingly difficult task. It’s an irresistible setup that’s handled with ease by director John Sturges, a filmmaker who’s no stranger to this sort of thing (he would go on to helm The Great Escape and Ice Station Zebra). With its endlessly quotable dialogue and thoroughly cool vibe, there’s a reason that The Magnificent Seven remains a pivotal example of the genre.

Best quote: “We’ll fight with guns if we have them. If we don’t, with machetes, axes, clubs, anything!”
-Hilario

Because The Thing from Another World, Christian Nyby’s 1951 adaptation of John W. Campbell Jr.’s short story Who Goes There?, is a science-fiction classic in its own right, some folks might question the presence of John Carpenter’s The Thing on this list (and in the No. 1 slot, no less). But given that The Thing manages to deliver on virtually every level — from the performances to the dialogue to the visuals — the film has become a classic that deserves to be mentioned in the same breath as other notable examples of the genre.

Featuring a cast comprised entirely of men, The Thing follows a group of scientists as they attempt to survive after being infiltrated by a shape-shifting monster. With its gooey, bloody special effects and unforgettable dialogue, it’s not difficult to see why this film has become a cult classic. Carpenter does a fantastic job of keeping the proceedings tense throughout, while star Kurt Russell steps into the shoes of tough-guy antihero R.J. MacReady with a remarkable sense of ease. Ironically, The Thing is scheduled to remade as a television miniseries — although it’s probably a safe bet that Carpenter’s version will remain the definitive telling of this tale.

Best quote: “I don’t know what the hell’s in there, but it’s weird and pissed off, whatever it is.”
-Clark

“ted nugent called, says he wants his shirt back.”